A Moment Out of the Sun

In a solar eclipse, the new moon casts a shadow on the Earth and blocks out some or all of the sun. Photo courtesy NASA.

Editor’s Note: If you intend to travel to the path of totality for the Aug. 21 solar eclipse in the Carolinas: Plan ahead. With so many people expected to travel for this event, keep in mind the North Carolina Department of Transportation’s slogan: Arrive Early. Stay Put. Leave Late. Even if you are staying near home in North Carolina for the partial eclipse, nc.gov will be an online hub for information regarding the eclipse. Also check our resource list at the end of this story. Follow our social media Twitter @SeaGrantNC and @ncspacegrant for updates.

Summer typically ushers in a time of backyard cookouts, sandals and pools — essentially, fun in the sun. This year, add a twist to your  warm-weather social calendar: fun with the sun.

Save the date, set a reminder and soak in a celestial sight on Monday, Aug. 21, 2017. A total solar eclipse — when the sun is fully obscured behind the moon — will occur over 14 states in the continental United States.

“It’s a really grand spectacle of nature,” says Amy Sayle, an educator at the Morehead Planetarium and Science Center in Chapel Hill.

“To me it seems like an opportunity to really understand — in your brain and in your heart — that you live in a solar system of massive moving objects. The moon is going to pass in front of the sun and the moon’s shadow will fall on the continental U.S. And if you’re standing in the path of the moon’s dark inner shadow, you will see the sun completely covered up.”

And it’s going to happen fast. “The moon’s shadow is going to take roughly 90 minutes to race across the continent,” Sayle explains.

The first glimpse of the total solar eclipse from land will occur at Government Point, Oregon, at 10:15 a.m. PDT. The last place on the continental United States to see it will be near Charleston, South Carolina at 2:48 p.m. EDT.

The length of the total solar eclipse on that center line will vary, she adds. In Oregon, the sky will turn dark for about 2 minutes, while the southeastern part of the continent will see it for approximately 2 minutes and 40 seconds. 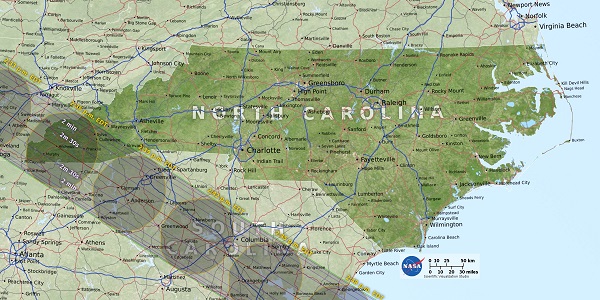 People in the southwestern tip of North Carolina will get to see the total solar eclipse. Photo courtesy NASA.

Partial and total eclipses are not the same experiences. “It will not cool down, it will not get dark, you will not see the nighttime sky, the stars, the planets,” says Mickey Jo Sorrell, another educator at Morehead Planetarium.

“Amy and I feel like our job from now until the eclipse is to tell everyone to go to the path of totality,” Sorrell continues. “We want you to go where you see the total solar eclipse.”

It’s been a long time since people living in this country experienced such an event.

A solar eclipse happens when the moon passes directly between Earth and the sun, casting the moon’s shadow on Earth and blocking our view of all or part of the sun.

Many scientists will have powerful telescopes trained on the sky during this eclipse. In addition to the ground observations, cameras on high-altitude balloons, astronauts on the International Space Station and equipment on other spacecraft orbiting Earth will be keeping a close eye on this event. This is an opportunity to learn more about the sun, the moon and the eclipse phenomena.

North Carolina Space Grant is working with the National Aeronautics and Space Administration and regional programs to enable students, scientists and space enthusiasts to gather data during this rare event.

Space Grant, based at NC State University, is a consortium of academic institutions that promotes, develops and supports aeronautics and space-related science, engineering and technology education and training in North Carolina. It works with NASA, businesses, nonprofit organizations and state government agencies to equip the current and future aero/space workforce in the state.

CSEI is an example of how programs within the National Space Grant College and Fellowship network collaborate across state lines to broaden the impact of their initiatives, Cook explains. 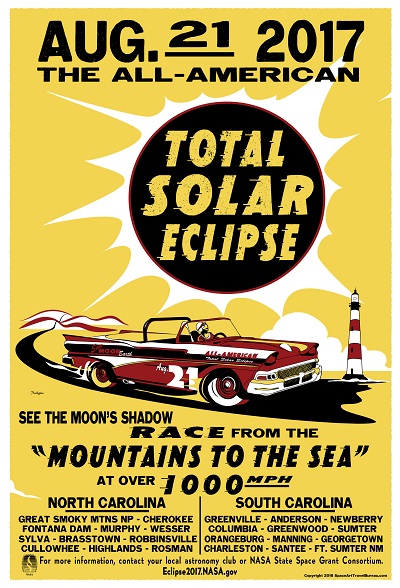 This image and other eclipse-related material are available at eclipse2017.nasa.gov. Photo courtesy NC Space Grant.

“Our goal is to bring awareness of science, technology, engineering and math to new audiences via a rare solar event,” she adds. “People of all ages are excited about the total solar eclipse. We look forward to engaging with the public and providing unique opportunities to turn that excitement into a teachable moment.”

The initiative includes Sayle and Sorrell from the Morehead Planetarium, as well as Pisgah Astronomical Research Institute in North Carolina, South Carolina State Museum in Columbia and Roper Mountain Science Center in Greenville, South Carolina. The CSEI team is offering programs for all ages, as well as professional development events for educators.

On the day of the eclipse, teams from North and South Carolina — along with about 50 others across the country — will participate in the Space Grant Eclipse Ballooning Project (eclipse.montana.edu), supported by National Space Grant.

They will launch high-altitude balloons across the path of the total eclipse from locations in North and South Carolina in conjunction with public solar-eclipse parties in both states.

Each balloon will carry cameras to gather footage of the moon’s shadow on Earth and the darkened sun. The cameras will stream live video and images to the NASA website and NASA TV.

Did someone mention party? CSEI is working with local organizations to offer opportunities for the general public to view the event and learn more at statewide solar-eclipse parties.

In North Carolina, the effort builds on Morehead Planetarium’s N.C. Statewide Star Party network. Sayle and Sorrell are training informal educators to lead these viewing parties. For a list of locations in the state, educational activities and other resources, go to moreheadplanetarium.org/eclipse.

The Morehead Planetarium will offer programs that day for those who cannot get to the path of totality, but the best viewing experience is not in Chapel Hill.

Perhaps you want to take a moment — now — to block out Monday, Aug. 21, 2017, in your calendar. If you can, plan a trip to the path of totality or join a statewide viewing event. Or grab some friends and plan your own viewing party.

Here, in the Triangle, join NC State’s College of Sciences for an Eclipse Day Celebration from 12:30-4 p.m., on the Brickyard. There will be special “eclipse glasses” and a telescope with a solar filter that will allow attendees to safely view the eclipse, plus make-your-own pinhole cameras, public-science projects and more eclipse-related fun.

Go before it is, you know, eclipsed by something else.

Find out more about North Carolina Space Grant at ncspacegrant.org. Details about the 2017 total solar eclipse are at eclipse2017.nasa.gov. Find out if you are in the path of totality at go.nasa.gov/2pC0lhe. 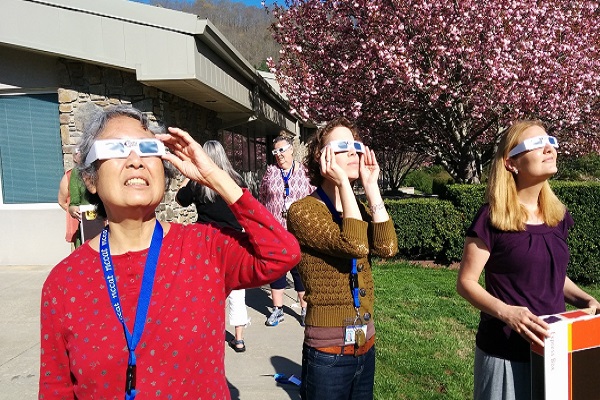 Always use proper protective eyewear to look at the sun. Photo by Amy Sayle.

Do not look directly at the sun during a partial solar eclipse, or even at other times. It can permanently damage your eyes.

“There is only one time when it is safe to look at the sun directly and that is during a total solar eclipse, during totality, when it’s 100 percent covered. Not before, not after,” stresses Amy Sayle, an educator at the Morehead Planetarium and Science Center in Chapel Hill.

“Any other time, if you want to look at the sun, you’ll have to use proper protection. The easiest, cheapest way for most people is going to be using what are called eclipse glasses,” she notes. Viewers also can look at the partial solar eclipse using a solar telescope or a regular telescope fitted with a solar filter.

All eclipse viewers will need special equipment to look at the solar eclipse. The American Astronomical Society wants the public to make sure to get eclipse glasses and handheld solar viewers from a reputable vendor and have compiled a list of such vendors at https://eclipse.aas.org/resources/solar-filters. For more on viewing safety, go to eclipse2017.nasa.gov/safety.